Crypto fans rejoice: Bitcoin rallies to the brink of $12,000

Bitcoin’s biggest rally in more than a week has pushed it to the brink of $12,000, a key level watched by chartists and technicians.

The world’s largest digital currency rose as much as 3.4% on Monday to around $11,835. Crypto fans are closely watching the $12,000 level as a major hurdle to cross before it can embark on a bigger rally.

The Bloomberg Galaxy Crypto Index, which tracks some of the largest digital coins, also rose, gaining 4.5% at one point. Dash and Monero were among the biggest advancers, each rising more than 5%. 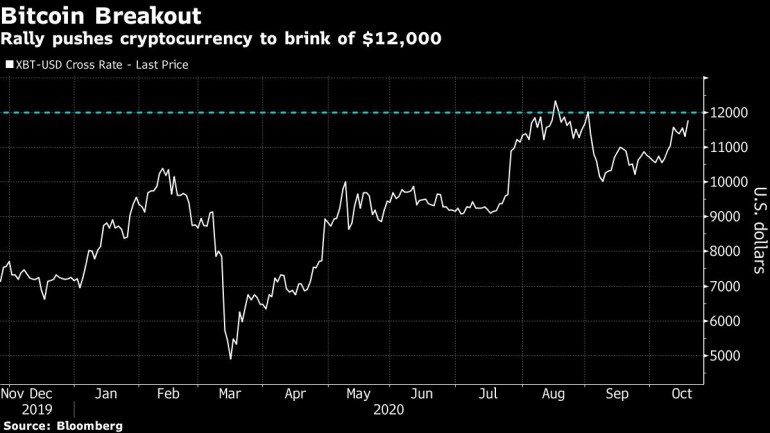 On Monday, the International Monetary Fund hosted a virtual panel on cross-border payments and digital currencies which featured BIS General Manager Agustin Carstens as well as the Federal Reserve Chairman Jerome Powell, among others. Powell said the central bank is evaluating the costs and benefits of a digital currency but has not decided yet on whether to issue one. He also nodded to Facebook Inc.’s Libra as a catalyst for focusing more attention on the issues.

The discussion at least partly helps explain Bitcoin’s move higher as it was closely watched by the crypto community, said Mati Greenspan, founder of Quantum Economics.

“Comments from Jerome Powell and the other participants made it clear just how far apart the various countries are when it comes to CBDCs,” said Greenspan, referring to central bank digital currencies. “Many on social media were quick to point out that a truly global and decentralized digital currency already exists.”

The coin’s trading Monday also helped it buck a recent trend of moving in tandem with U.S. equities, whereby it was often rising when they were and falling on risk-off days. The S&P 500 Index dropped as investors weighed the latest progress on a new government spending bill meant to help shore up the economy.

Many analysts remain bullish on the cryptocurrency, heartened by its limited supply and comforted by greater institutional acceptance in recent weeks. Square Inc., for instance, said earlier this month that it has made an investment of about $50 million in Bitcoin.

“We see Bitcoin emerging as a relative oasis of calm and outperformance,” wrote Mike McGlone, an analyst with Bloomberg Intelligence, in a note. “There should be little doubt technology and digitization will continue advancing, yet Bitcoin’s supply will keep shrinking, supporting its price.”